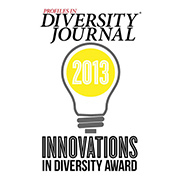 In 2012, the United States Air Force Academy (USAFA) unveiled an innovative pilot program designed by Chief Diversity Officer Dr. Adis Vila to build cadets’ crosscultural competencies. Ten cadets shadowed executives from May through June as Ambassadors of Inclusion (AoIs) at multinationals known for their best practices in diversity management and workplace inclusion. The program exposes cadets to different national and organizational cultures as their professions becomes increasingly complex, the Air Force is increasingly more diverse, and their jobs are increasingly performed in joint service arenas. Furthermore, interactions with allies (NATO), not for profits (in humanitarian spheres), and the private sector require officers to operate in an increasingly global environment.

The USAFA will execute a second pilot in the summer of 2013. Twelve cadets will visit partners at Coca-Cola (Egypt), Sodexo (Canada), Ingersoll Rand (India), Cargill (Belgium), Western Union (Costa Rica), and Johnson & Johnson (Belgium). In 2012, IBM, Chindex, Sodexo, Ingersoll Rand, and Wal-Mart hosted cadets throughout the world. The program is at no cost to the USAF and USAFA. The multinationals pay for round trip air fare, housing, and per diem.

Of the 2012 cadets, six were women, with an overall 60 percent participation rate. (The percent of women at the Academy hovers around 18 to 22 percent.) Participants in 2013 represent eleven academic majors, and include four females, one African American, two Hispanics, three Native Hawaiian/Pacific Islanders, and one Asian American. Three are first-generation college students and only one has traveled abroad.

To prepare the cadets, they use Google documents to provide them with readings on culture (e.g., cultural dimensions identified by Geert Hofstede), their host country, and host firm, and had cadets participate in lectures on international business and law, crosscultural management, and crosscultural communications.

To lead an increasingly diverse work force, cadets must develop competencies or “knowledge, skills, abilities, and attitudes (KSAAs)” that will enable them to manage diversity and create inclusive organizational cultures. One inaugural cadet stated, “Adapting to new cultures wasn’t so easy for me, but it was a great learning experience.”

With the help of the Defense Equal Opportunity Management Institute (DEOMI) and the ICCM, six skills were identified and measured as required for effective global leadership including:

Although the AoI experience is brief, it is unique to any of the service academies. By having cadets observe best practices in diversity and inclusion, shadow positive role models, and participate in organizational practices different from USAFA practices, cadets will develop greater crosscultural competencies.