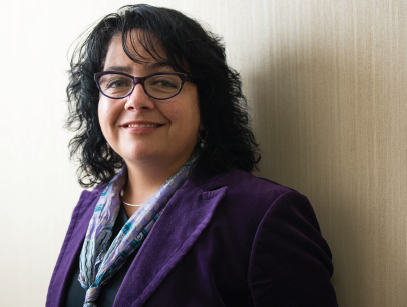 Headquarters: Yellowknife, Northwest Territories, Canada
Education: Honours Bachelor of Arts, Queen’s University;
Master of Arts, Royal Roads University
First Job: A colourful bar in Yellowknife, where I learned the most about human behaviour and teamwork
My Philosophy: Diversity brings richness and strength. Sometimes a perspective you didn’t expect can also remind you of the humanity of a situation.

Guiding our decisions and actions

The Northwest Territories (NWT), with a population of just under 44,000 people dotted across 1.1 million square kilometres, is incredibly diverse and accepting. Take it from me, a first generation Indo-Irish Canadian, who has Aboriginal stepchildren and lived in a remote Aboriginal community north of our capital city, Yellowknife.

The NWT’s population is younger than the rest of Canada, and 52 percent is Aboriginal. English isn’t the first language for many NWT residents, and we have eleven official languages—English, French, and nine Aboriginal languages. Through a recent anonymous workforce survey, our government confirmed that we have far more employees with disabilities than previously estimated. These are just some examples of the diversity of the people who call the NWT home and work at the Government of the Northwest Territories (GNWT).

At the GNWT, we pride ourselves on our diversity. Because of our knowledge of our workforce and the people we serve, we provide Disabilities Awareness Training and Aboriginal Cultural Awareness Training to our staff. As one of our government cornerstones, knowledge of Aboriginal cultures, experience, and tradition greatly influence front-line service delivery and program/policy development.

Our Aboriginal Employees Advisory Committee and GNWT Advisory Committee on Employability provide advice on initiatives for employing Aboriginal employees and persons with disabilities. We also know attracting young people to the GNWT is key as we develop the next generation of public servants, so we provide young people with opportunities for work as summer students and interns.

Example setting is one of the best ways to lead others. In 2009, as assistant deputy minister for the Department of Municipal and Community Affairs, I was pleased to become champion for one of the five strategic goals of 20/20:

A Brilliant North, the NWT Public Service Strategic Plan. Goal Two of the plan emphasizes, in part, attracting, recruiting, and maintaining a stable, representative, public service, that reflects the NWT’s diversity, and which provides quality programs and services effectively and efficiently. For our work in promoting workplace diversity, the GNWT is proud to have been named one of Canada’s Best Diversity Employers in 2013 and 2014. We were also named one of Canada’s Top 100 Employers in 2013.

Maintaining a representative workforce of almost 5,000 employees while being a competitive employer can at times be challenging, but it is also rewarding and creates opportunities for innovation. To best serve our people, it makes good business sense for the GNWT to embrace a diverse and inclusive workplace.