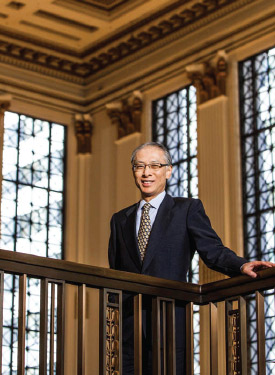 Diversity has been described as “the art of thinking independently together.” From personal experience, I agree—and inclusion makes the art possible.

It’s hard to imagine greater contrasts. California and New York are among the world’s most culturally diverse populations, and Japan one of its most homogenous. But I learned early that despite how dramatic—or subtle—people’s differences are, similarities are equally dramatic.

When I was a five-year-old boy in Tokyo, my father took a job in New York and moved our family to the Bronx. It was hard at first because I didn’t speak English, and no one at PS 24 spoke Japanese. But I quickly saw how respect and kindness could bridge deep differences. I think of this every day as I lead 14,000 employees representing all walks of life.

On a practical level, championing diversity and inclusion is the smart thing to do. Companies reflecting the faces of customers do better than those that don’t—it’s common knowledge and common sense. Business needs to appreciate age, gender, physical ability, ethnicity, sexual orientation, cultural values, personal history, and other factors that make us uniquely human.

That’s why diversity and inclusion are cornerstones of our organizational philosophy. We’ve identified 25 dimensions of diversity among our colleagues and communities, and we champion them. We engage employee resource groups to develop distinct talent; we recruit to enrich our employee mosaic; we train to tap the strengths of our diversity; we engage through volunteerism and advisory boards; and we encourage multiple points of view expressed at all organizational levels. I created the position of chief diversity executive at Union Bank, reporting directly to me, with the sole mission of building diversity, particularly among top management.

We’re not perfect, but we’re improving. Half our employees are people of color. Sixty percent are women. Our Union Bank board is one of the most diverse of any major U.S. company. This is all good business and the smart thing to do.

But it’s also the right thing to do. Regardless of differences, everyone is basically the same. We all want to be heard, respected, and treated fairly. If we meet these needs, we bring out our best.