A discussion with Nick Jimenez, Comcast’s Senior Manager of Political Affairs By Nikki Hunt In 2009, Comcast Corporation acquired a 51 percent of NBCUniversal...

In 2009, Comcast Corporation acquired a 51 percent of NBCUniversal from General Electric. Along with a majority stake in the network station and ownership of their iconic peacock logo, Comcast gained some of the newly acquired company’s best practices, including its employee resource groups.

At the time of the merger, NBCUniversal was already home to eight employee resource groups, including groups for women, LGBT, and African Americans. The opportunity to create a Hispanic group inspired Comcast team member Nicolas Jimenez to get involved.

“In [email protected], we focus on three things—developing our members, giving back to our community, and making an impact on our businesses,” Jimenez says—and as the founding lead of the group, he would know. “The most surprising thing to me was the involvement of our members. I expected entry- to mid-level employees would come to the events, but we have an incredible group of executives who really take the time to attend our meetings and stay active in what’s going on.” With participation from both Comcast and NBCUniversal, [email protected] has over 180 active members.

Born in San Juan, Puerto Rico, Nicolas Jimenez moved to Philadelphia in 2006 to attend Temple University’s Fox School of Business. His sister, who had recently started working at Comcast, referred him to the Comcast internship program—which launched his career with the company in 2007. He is now Comcast’s senior manager of political affairs.

But Jimenez didn’t always think he would end up in the corporate world; during college, he started a commercial painting company, booking jobs by word of mouth. It’s no surprise, then, that one of his favorite parts of working with Comcast isn’t related to his job title. Instead, it involves facilitating a special charitable contributions fund. “I think it’s the coolest part of my job. I manage three million dollars a year in donations to organizations as big as the United Way (our number one recipient) or as small as individual churches.”

It isn’t just managing charitable donations that makes Jimenez proud to work at Comcast. He also serves as a Big Brother through the company’s Beyond School Walls partnership with Big Brothers Big Sisters and coordinates a group of employee volunteers who visit a local school to speak with students about their futures. “Edison High School in North Philadelphia is majority minority, and has a graduation rate below 40 percent. Suffice it to say, the students at Edison face many challenges. But, recently, the school district has classified it a Promise Academy, designating extra resources in an effort to turn it around. Basically, what some fellow Comcasters and I do is visit the school for a day to share our stories with the kids and answer their questions about college and careers.”

Before the Comcast team’s first visit to the school two years ago, Jimenez sent out an email asking others to join, and recruited Josh Cortes, an Edison alum. “When we went to speak, we started with the ninth graders, in their individual classrooms. Afterwards, the school administrators asked if one of us would speak to the tenth through twelfth graders in the auditorium, since each classroom would only have a few students in attendance. Josh spoke about his life, what he does, and where he’s from. When he finished, the students gave him a standing ovation. He was able to get a room full of high school students to really listen, because they related to him, and could see what was possible if they expanded their horizons and stepped up to the challenge.” 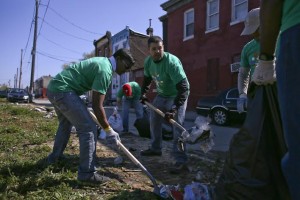 That first year, three Comcasters were involved. Last year, a dozen participated. “This year, we hope to double that. It’s absolutely amazing to see. These kids, coming from a tough neighborhood, usually have to hide what they’re interested in or what their goals are, but they open up when they hear our stories and are able to see a way out for themselves.”

Jimenez can sympathize with students holding back. “I was never that person in high school who signed up for clubs or groups, nor was I like that in college. It wasn’t until I started here, right around the time of Comcast Cares Day, that I saw the impact that can be made when people volunteer their time and effort.”

Since its inception in 2001, Comcast Cares Day has become the largest corporate volunteer effort in the nation—more than 2.6 million volunteer hours have been served to date. “I saw people using their Saturday to give back, executives working next to regular employees. It really opened my eyes. The mentoring, the culture here at Comcast, has really been the most rewarding part of my job.” Last year, Unidos teamed up with Congreso de Latinos Unidos on Comcast Cares Day to beautify and add a playground at Von Nieda Park in Camden, New Jersey. This year, Jimenez and Cortes decided to pay back Congreso by leading a project at their North Philadelphia headquarters. With 200 volunteers, the team worked to rejuvenate the campus, cleaning up empty lots, painting murals, and expanding a community garden that will be a food source and a point of pride for the local community.