The Rise of the Super Commuter

By Megan Bearce, LMFT More couples and families are challenged with handling long-distance work arrangements than ever before. Super commuters are people whose jobs... 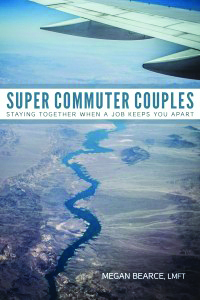 Bearce’s new book offers practical guidance for navigating not only the commute itself, but also the ins and outs of staying together while living apart.

More couples and families are challenged with handling long-distance work arrangements than ever before.

Super commuters are people whose jobs are far enough away from home that they must live apart from their families for days, weeks, or even months at a time. It can also be used to define those who commute 90 miles or more on a daily basis.

New York University’s Rudin Center for Transportation Policy and Management has published recent studies on this trend. In fact, the Rudin Center reports that as many as 13 percent of workers in large US cities are currently super commuting. It’s not just a trend in this country either; reports show the number of international super commuters is on
the rise as well.

Why the increase in super commuting?

In most cases, family members decide in favor of super commuting because they feel it is in the best interest of the whole family. Perhaps a spouse is pursuing his or her dream career, or fulfilling a military obligation. Or maybe super commuting just makes economic sense.

Whatever the reason, there seem to be three primary factors driving the rise in super commuting today. First, many families are still living in struggling housing markets or suffering the effects of the recession. In many cases it’s simply not financially feasible to move.

Second, we’ve seen a huge increase in the number of dual career couples over the past two or three decades. When one partner gets a promotion or offer far from home, the other partner may be unwilling to give up his or her job, or may have difficulty finding employment in the new location. A decision to super commute is often made by the couple at this point.

Third, we’ve seen a recent wave of downsizing and restructuring within corporations across the US. An employee may be asked to move or risk unemployment due to a company’s strategic change in direction or location.

Obviously, technology has also played a huge part in the super commuting trend. With visual communications, smartphones, and many other tools available, workers often have more flexibility to work outside the corporate office. Employees aren’t always expected to be at the office Monday through Friday from nine to five, which makes super commuting seem more “doable” to families and their employers.

As a therapist, I’ve seen the number of clients who are part of a super commuting couple increase substantially over the past few years. I’m also living it myself as the wife of a super commuter for the past three years. I decided to write Super Commuter Couples because I felt it was an important and growing issue for families. After interviewing more than two dozen people in super-commuter relationships, I learned quite a bit about how families are navigating this often challenging situation, and doing it well. From my conversations, and the ongoing research from the Rudin Center and others, I found three key components evident in every successful super-commuter relationship:

2. Successful super commuters know how to manage what I call “re-entry.” The constant comings and goings of the super commuter breaks up the daily routine. Each family has a system they’ve learned that works when Mom or Dad is gone. When Mom or Dad returns, there is a constant transition from being a single-parent family to a dual-parent family. Knowing how to move through this transition on a regular basis can make, instead of break, a super commuter relationship.

Many successful super-commuter families have learned how to build an effective family structure despite the challenges of space and time. It takes determination, creativity, and a lot of love. It’s not always easy, but it can be done.