Is it a coincidence that the percentage of women in board seats continues to hover at 16 percent? Or that, despite all our efforts—and...

Is it a coincidence that the percentage of women in board seats continues to hover at 16 percent? Or that, despite all our efforts—and victories—there has been little increase in the overall percentage of women occupying high-level positions in business and government institutions? Could we be unconsciously programmed to maintain these levels?  Recent studies by the Geena Davis Institute on Gender in Media suggests that may just be the case.

She might be best known for her portrayals of strong, fearless women in classics like Thelma & Louise and A League of Their Own. But eight years ago, this Academy Award Winning actor and mother of three took on her biggest role to date.

While watching movies with her daughter, Geena Davis noticed a profound lack of female characters. “I thought, ‘if I notice it, then what message is this sending her—sending all girls?’”

Since that discovery, she’s made it her business to change the way women are depicted by the entertainment industry. Today, the research being compiled by the Geena Davis Institute on Gender in Media is helping educate studios and artists on importance of gender equality in their work—especially in media geared toward young viewers—and just how far reaching its impact may be.

“The world that’s created in media is not at all reflective of reality,” says Davis. “Women take up half of the space in the world, but only 17 percent of your average crowd scene. Not only is the population short on women, but there is a real shortage of diverse and exciting role models for girls and young women.”

“And we accept this because it ‘looks normal’ to us,” she says. 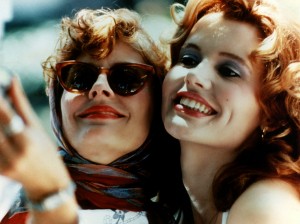 Davis cemented her reputation for playing strong, empowered women with the 1991 action film Thelma & Louise, in which, she and Susan Sarandon played friends on the run from the law. “I came away from that film with a heightened awareness of what these types of powerful roles can mean for women,” she said. “It has colored all my acting choices since.”

Indeed, the male-female ratio of characters in films has not changed since 1946. It is the reason that gender inequality isn’t always immediately recognizable. Even those who create “family friendly” media are shocked by the realization that they may be perpetuating this trend.

“Every studio has a diversity department,” says Davis. “They’re always shocked and mortified when we present our data. No one ever says, ‘so what.’ They want the work produced to be positive for kids.

“It is totally unconscious, but it impacts our thoughts and decisions in real life in a very real way. The way women are portrayed, or not portrayed—or just as damaging, when they’re completely absent—has a real effect on how we see ourselves.

“It is one of the reasons I’m a strong advocate for equalizing populations. We’re currently sending the message that women are invisible.”

According to the organization’s newly released Gender Bias Without Borders, Global Gender in Film Study, conducted by the research team at the Media, Diversity, & Social Change Initiative at the University of Southern California, this is not solely an American media trend. Of the 120 international films analyzed, the average gender ratio was 2.24 males to every one female. Only 23.3 percent of the films had a female as a lead or co-lead driving the plot. Only 30.9 percent of the women had speaking roles at all.

In roles depicting STEM careers, women were outnumbered seven to one. According to Davis:

“We have to do a better job of allowing girls to see themselves in exciting and diverse roles.

“Media images can have a very positive impact on our perceptions. In the time it takes to make a movie, or a TV show, we can change what the future looks like. There are woefully few women CEOs in the world, but there can be lots of them in films. How do we encourage a lot more girls to pursue science, technology, and engineering careers? By casting droves of women in STEM, politics, law, and other professions today in movies.

“Girls need to see more women as leaders, asserting themselves and being in charge of their own destinies. It’s why our motto is, ‘if she can see it, she can be it.’” 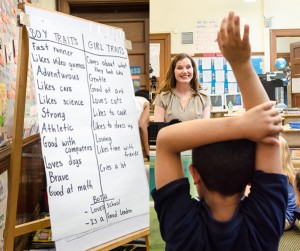 The second graders at Brighton, Massachusetts’s Winship School got a personal introduction to the pilot learning video series “Guess Who?”The series was created in partnership with the IndependentTelevision Service to help kids challenges their assumptions about gender stereotypes.

It’s easy to look at some of the most recent top-grossing family films, like Frozen and The Hunger Games, and think strong female characters are in no short supply.  But Davis is skeptical that this latest crop of films represents an industry “aha moment.”

“We see this cycle every few years, when movies come out about strong women, we think ‘this is it, this is progress,’” she says. “We have to keep reminding ourselves that we’re not done yet. Now that we have the measurement tools in place, we will, however, be able to tell when we’re effecting real change.”

In the meantime, Davis points to anecdotal evidence that putting research in the right hands can make a difference. “We often hear writers or directors say, ‘you just changed my next project’, or ‘we’ll have to rethink this now,’” she said. “We also recently conducted an Impact Study of industry executives. Of those that responded, 68 percent said the findings impacted two or more projects, and 41 percent said it impacted four or more.”

“Because the media industry is so fast paced, it provides an incredible opportunity to change ‘what looks normal’ as far as equality is concerned.  And that’s a change we can make overnight.”