What happens when a CDO leaves?

Developing the Next Generation of Chief Diversity Officers in Higher Education By Oliver Tomlin, Senior Partner, Witt/Kieffer   The role of chief diversity officer at...

Developing the Next Generation of Chief Diversity Officers in Higher Education 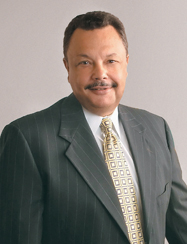 The role of chief diversity officer at colleges and universities has blossomed and evolved over the years. It has gone from being a primarily tactical position to a strategic one, requiring a much more multifaceted skill set than in the past.

As the chief diversity officer position becomes fundamental to an institution’s strategic vision, it follows that there should be a greater emphasis on succession planning—that is, ensuring continuity in the role so that, if one CDO leaves, the torch is passed to another who can hit the ground running and build upon previous successes. This becomes more critical when we consider the fact that roughly half of the CDOs surveyed told us that they planned to leave their current positions within three years. One reason for this planned exodus is that CDOs are attractive candidates to move up in the administrative ranks, even into presidential and provost positions.

As a follow-up to our 2011 survey, we recently conducted another focused on CDO succession planning, in which we asked specific questions about whether chief diversity officers were grooming successors and taking steps to ensure continuity upon their eventual departure. My fellow author, Lucy Leske, and I presented our key findings at the NADOHE 8th Annual Conference this year in San Diego. As the charts below suggest, institutions are preparing for the future, though only 12 percent have a formal succession planning process. 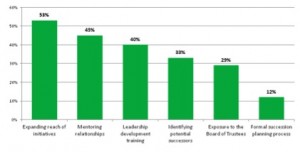 What is your institution doing to ensure the continuity of the role of the CDO?

At most institutions, potential successors to the CDO role are identified on an ad hoc basis, whether through an informal internal process or through external recruitment. Only a few respondents suggested that CDO successors were identified formally, as part of institutional succession planning.

Are CDOs themselves doing enough to nurture the next generation? The graph below suggests that mentoring and other critical activities are indeed taking place, though they can certainly be increased across the board. 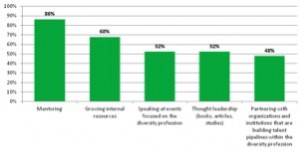 What are you personally doing to educate and transfer knowledge to the next generation of CDOs?

Among the expanding responsibilities that chief diversity officers in higher education must take on today is planning for their eventual exit. A good CDO must be on the lookout for his or her successor, and groom others to fill this role throughout academia as well. Institutions, too, must prioritize CDO succession planning so that the gains and accomplishments of one diversity leader are not lost in the transition to another.

Witt/Kieffer Senior Partner Oliver Tomlin and Lucy Leske, Managing Partner for its Education Practice, are authors of Developing the Next Generation of Chief Diversity Officers in Higher Education. Download a copy of the special report at http://pdjrnl.com/CDOsuccession.