Lynne Doughtie to serve as Chairman and CEO of KPMG

Former Women Worth Watching Award Winner Takes On KPMG’s Top Role   KPMG in the U.S. has elected Lynne Doughtie to serve as its... 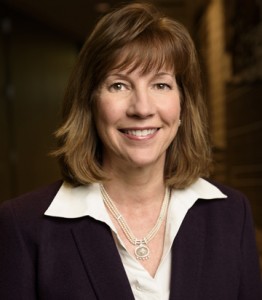 KPMG in the U.S. has elected Lynne Doughtie to serve as its next Chairman and Chief Executive Officer, for a five-year term starting July 1. Doughtie currently leads KPMG’s Advisory business, and has distinguished herself in numerous leadership positions since launching her career in the firm’s Audit practice three decades ago.

“It is an honor to have the chance to lead KPMG at such a pivotal moment, when ensuring quality and confidence in the work we do has never been more important” said Doughtie. “Our firm, our clients and the entire marketplace are looking at a future of unprecedented change and extraordinary opportunity, where ‘business-as-usual’ is going to mean constant innovation and transformation. I’m excited to team with our incredibly talented people, as we work closely with companies and other organizations to help them address their most complex challenges and opportunities.”

Doughtie will succeed John Veihmeyer, who has served as U.S. Chairman and CEO since 2010 and simultaneously as Global Chairman of KPMG International since February of 2014. When Veihmeyer became Global Chairman, he indicated that he would serve the remainder of his term as U.S. Chairman and CEO through its close on June 30, 2015, before focusing exclusively on his international role. He will continue to be based in the U.S. as he leads KPMG globally.

“Lynne Doughtie is an incredibly innovative, thoughtful and inspiring leader, who has the exact qualities needed to lead our firm and our people in a time of increasing complexity and change,” said Veihmeyer. “She has been a key member of our management team during a period in which we have built a strong culture within KPMG, that promotes integrity, high performance, and diversity and inclusion, and I know Lynne will continue to champion these values. She has led our U.S. Advisory practice to unprecedented levels of success and established it as KPMG’s fastest growing business. Lynne will be an extraordinary and inspiring leader for KPMG and our people. I’m also pleased that she will be joined by P. Scott Ozanus, who will continue in his role as Deputy Chairman and Chief Operating Officer. Scott has been a true steward of the firm and has been instrumental in the development and execution of our strategy and the unprecedented growth the firm has experienced over the last several years.”

Doughtie, 52, becomes Chairman and CEO of KPMG at a time of tremendous momentum for the firm. With strong growth across all three of its businesses, KPMG was the fastest growing Big Four firm in the U.S. for fiscal year 2014. The firm also surged 17 spots to become the highest ranked of the Big Four on Fortune Magazine’s prestigious list of the “100 Best Companies to Work For” in 2015, and it continues to expand through strategic alliances, the hiring of key talent, and numerous acquisitions.

Doughtie joined KPMG’s Audit practice in 1985 and went on to serve in a number of national, regional and global leadership roles, including as the lead engagement partner for some of the firm’s major clients. She is a member of the U.S. firm’s Management Committee and KPMG International’s global Advisory leadership team. Since 2011, she has led KPMG’s Advisory business in the U.S., charting a path of tremendous growth, including the establishment of market-leading positions in business and risk consulting and transaction advisory services. She has also overseen the expansion of KPMG’s capabilities in innovative services and solutions, including information security, strategy, digital/mobile and transformation.

Doughtie has been recognized with numerous honors and awards throughout her career, including being named one of Consulting Magazine’s “Top 25 Consultants” and “Top Women Leaders in Consulting.” She was also featured in Profiles in Diversity Journal’s “Women Worth Watching,” and recognized in Accounting Today’s “Women in Accounting.”

She is a proud graduate of Virginia Tech, where she earned a Bachelor of Science degree in accounting. She remains an active alumnus, and is past president of the Advisory Board of the school’s Pamplin College of Business and a member of the Accounting and Information Systems Advisory Board. In 2007, she was awarded the Distinguished Alumnus Award, for outstanding career accomplishments and contributions to the college.  Doughtie has earned CPA certification in Virginia and New York and is a member of the American Institute of Certified Public Accountants.