En Français Member of the Firm at Epstein Becker Green, Pierre Georges Bonnefil has been appointed a Chevalier in the French Légion d’Honneur by the... 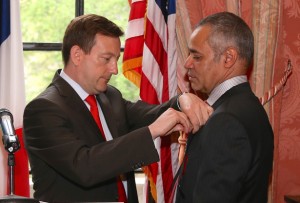 French Consul General Bertrand Lortholary presents Pierre Georges Bonnefil with the designation of Chevalier in the French Légion d’Honneur by the Republic of France.

Member of the Firm at Epstein Becker Green, Pierre Georges Bonnefil has been appointed a Chevalier in the French Légion d’Honneur by the Republic of France. The designation was presented to Bonnefil by French Consul General Bertrand Lortholary at an official ceremony at the French Consulate in New York City on May 5, 2015.

Established by Napoleon Bonaparte in 1802, the Légion d’Honneur has been France’s highest award and one of the most coveted distinctions in the world. This highly regarded award is given annually to individuals who are most committed to preserving French heritage and connecting French culture to their work in the United States and who most exhibit outstanding public service. In 2007, Bonnefil also received the Ordre national du Mérite.

In addition to Bonnefil, the French government also recognized EBG Managing Director Emeritus George Sape, awarding him the Ordre national du Mérite in 2001 and the Légion d’Honneur in 2010.

“We are proud that Pierre has received such a high honor from the French government and count ourselves very fortunate to call two such distinguished ambassadors of French culture and public service, Pierre and EBG’s Managing Director Emeritus George Sape, our colleagues,” said Mark E. Lutes, Chair of EBG.

Bonnefil is a Member of the Firm in the Immigration Law Group within EBG’s Employment, Labor, and Workforce Management practice. Based in New York, he is Vice Chair of the firm’s Diversity and Professional Development Committee, Chair of the firm’s Hispanic Business Group, and a member of the firm’s Technology, Media, and Telecommunications (TMT) strategic industry group. Bonnefil, who has served as an Attorney General Honors Attorney with the U.S. Citizenship and Immigration Services, has extensive experience representing both companies and individuals. He is also a member of the Board of the American Society of the French Order of Merit.