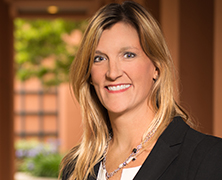 Senior vice president of integrated planning and franchise management for The Walt Disney Studios, Cathleen Taff drives collaborative efforts to maximize the value of the studio brands and creative properties across all company divisions. A 21-year Disney veteran, she champions many company initiatives, while simultaneously emphasizing the development of her team.

Cathleen began her career as a Senior Financial Analyst and earned several promotions, becoming the vice president of finance for the Disney Music Group. During her tenure, she played a pivotal role in transforming the struggling segment into a $100 million business and was promoted to senior vice president in 2001.

“…a journey of balance.”

In 2003, Cathleen transitioned to the role of senior vice president and controller of The Walt Disney Studios, where she was instrumental in developing and implementing a cost-saving initiative that generated over $100 million. In 2008, she became the head of Strategic Operational Initiatives, a role created specifically with her in mind. Cathleen built and developed a new team whose goal was to collaborate across all lines of business to identify and implement sustainable efficiencies and cost savings. She later rejoined the Disney Music Group as senior vice president and general manager and became the principle architect of a reorganization transitioning the group to a more streamlined model.

As executive sponsor of [email protected], which supports and develops female leaders, Cathleen helped grow the group to more than 1,000 members. She also participates in the Young Storytellers Program, where employees mentor elementary students, guiding them in writing their own screenplays.

“Being a woman in this profession has been a journey of balance,” said Cathleen. “I needed to learn how to give my best to all facets of my life, whether as an employee, a leader, or mom. It is not a ‘one size fits all’ approach, but as my mentor taught me, it’s about making the right moment-by-moment decision for me.”

Cathleen holds a bachelor’s degree in business economics (emphasis in accounting) from the University of California–Santa Barbara and is a certified public accountant in California. Prior to joining the Disney organization, she worked at Deloitte & Touche.

…an honest sense of herself—what drives her, what inspires her and what makes her uniquely and authentically who she is – the good and the bad.

Worry less. I cannot remember for the life of me any of the catastrophes or things I thought would negatively impact my life.

To everything, there is a season.

The one thing I’d do differently in my career, knowing what I know now, is:

…I wouldn’t do anything differently as my journey has been amazing and I was able to learn and grow with each difficulty or tough moment. My journey has shaped me into who I am today and I wouldn’t trade where I am now, personally or professionally, for anything.

…think about it throughout the day, take notes on my thoughts, and then I go home, eat, go to bed, and wake up in the wee hours of the morning and tackle it.

…moving into a role where I managed staff. It taught me a great deal about how to get the best out of others and the need to focus on encouraging and empowering my team to achieve success.

…a journey of balance. I needed to learn how to give my best to all facets of my life, whether as an employee, a leader, or mom. It is not a ‘one size fits all’ approach, but as my mentor taught me, it’s about making the right moment-by-moment decision for me.

…necessary. It helps you grow and learn new things, but it also teaches you humility. It is not about the failure itself, but what you do with the lesson learned that matters going forward.

…establishing and communicating my boundaries.   While I love and am invigorated by my Disney job, my primary role is that of a mom and I have some amazingly talented daughters that need me to be there for them.

Disney had me at ‘hello.’ This company is such a blessing as it touches families and helps them create memories that last a lifetime. I cannot imagine wanting to be anywhere else.