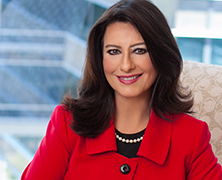 Ileana Martinez has been practicing law for 28 years and is a member of the Georgia, Florida, and Connecticut bar associations. As a partner at Thompson Hine, she handles complex business and commercial cases, including those involving breach-of-contract and fiduciary duties, tortious interference, trade secrets, fraud, civil conspiracy, and noncompete provisions. She serves as national, regional, and local product liability litigation counsel for pharmaceutical and medical device companies, and other commercial product manufacturers.

Among her professional distinctions, Ileana is AV Preeminent® Peer Review Rated by Martindale-Hubbell and was selected to the 2014 and 2015 Georgia Super Lawyers® lists. In 2014, Ileana received an Outstanding Advocacy Award from one of her clients, Medmarc, an industry-leading company.

“One of the important lessons I’ve learned along the way is that unexpected change can be a very good thing,” said Ileana about her career path. “After working with the same law firm and partners for 17 years, the firm disbanded and I left the comfort of the known for the risk of the unknown. Yet, I have continued to thrive both personally and professionally.”

“When I reflect back on what I perceived as a failure at the moment it was happening, I find that it was actually a blessing in disguise and a catalyst for events that later put me in a better place or situation,” she said.

“…unexpected change can be a very good thing.”

Ileana leads the Atlanta committees for Thompson Hine’s Spotlight on Women program and Diversity & Inclusion Initiative. Atlanta Mayor Kasim Reed named her to his Welcoming Atlanta Advisory Committee, a select group of business and community leaders who collaborated to provide the mayor with recommendations related to the immigrant population and its role in Georgia society and business. Ileana also serves on the boards of the Girl Scouts of Greater Atlanta and Cristo Rey High School.

Ileana is an immigrant to this country, having been born in Cuba in 1960, at the height of the communist revolution. She is married to Ed Martinez, president of the UPS Foundation, and has three children and three grandchildren.

What I’m Reading: “Go Set A Watchman” by Harper Lee

Begin developing your marketing and client development skills and activities from your first day on the job. Join professional or community organizations and groups with which you share common interests, and develop relationships that are personally and professionally rewarding.

Whatever you do, do it with all your heart.

…I would do a better job of finding some down time for myself – to read a book, to exercise, or to just take a moment and do nothing. Being right with ourselves first makes us better workers, family members, friends and people overall.

…assess and gather the resources needed to complete the project including team members and required information and documentation.  I create a mental outline of the project steps, and visualize the completed project.

…that unexpected change can be a very good thing. After working with the same law firm and partners for 17 years, the firm disbanded and I left the comfort of the known for the risk of the unknown. Despite this, I have continued to thrive both personally and professionally.

…very challenging. I have had to balance the demands of a profession that to a large extent judges my professional performance and determines my compensation on how many hours I work with the demands of being a good wife and mother to three children.

…simply a part of life, an experience from which we learn, and one that ultimately helps us appreciate success even more. When I reflect back on what I perceived as a failure at the moment it was happening, I find that it was actually a blessing in disguise and a catalyst for events that later put me in a better place or situation.

…taking long walks during the weekends, taking some time during the year to travel with my family, and simply spending time with my kids and grandkids having a nice meal or enjoying a movie.

…growing up, I would hear interesting stories about trials and cases from my mother, a lifelong legal secretary. One of the first words I learned to spell was subpoena. When I turned 15, I met a young man who wanted to become a lawyer. Three years later, we married, and we both became lawyers; a source of further bonding in our relationship.