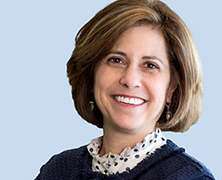 It’s Her Dedication that Makes the Difference

Before joining Walgreens, Jan served as executive vice president of human resources, general counsel, and corporate secretary at Solo Cup Company in Lake Forest, Illinois. She came to Solo from Baxter International Inc., where she was associate general counsel, chief governance officer, and corporate secretary. Jan began her legal career in the corporate group at Bell, Boyd and Lloyd in Chicago, before moving to an in-house position at Waste Management.

“They encouraged us to come to conclusions on our own ….

“If you ask me what has best served me in my career it would be my mom Dale Stern, a therapist, and my dad Bud Stern, an attorney,” said Jan. “They were balanced and sane in their approach to raising my brother and me. They encouraged us to come to conclusions on our own, always within the guardrails of ethical decision-making.“

Jan holds a bachelor’s degree from the University of Michigan and a JD from Northwestern University. She is a member of the Illinois Bar Association and serves on the boards of directors of Meals on Wheels in Chicago and Umoja Student Development Corporation.