Featured23
By Teresa Fausey Technology is nothing. What’s important is that you have a faith in people, that they’re basically good and smart, and if... 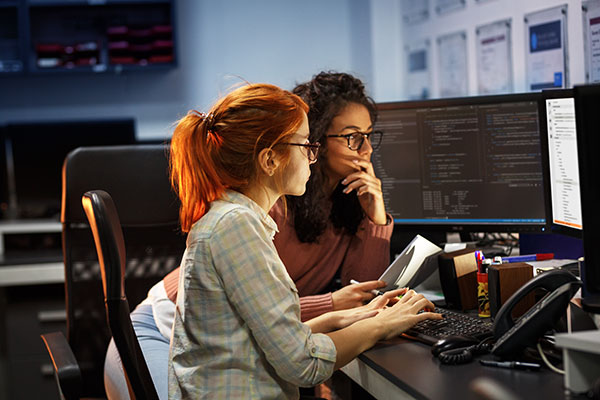 Technology is nothing. What’s important is that you have a faith in people, that they’re basically good and smart, and if you give them tools, they’ll do wonderful things with them. – Steve Jobs

So, why is it that in tech, and perhaps to a lesser extent in other fields, that “faith” Jobs mentions in the above quote is so often not extended to women? From childhood to college to work, women who pursue educational experiences and careers in STEM fields aren’t assumed to be “good and smart,” and aren’t given the tools or the support they need “to do wonderful things.” In fact, they are less likely to be listened to, less likely to be hired, less likely to be recognized or promoted, and more likely to be criticized, ignored, and excluded in school and at work. As a result, many women and minorities, who have dedicated themselves to a STEM discipline, earned advanced degrees, and worked hard in jobs they say they love, will eventually quit their STEM jobs and seek other careers.

A report from the U.S. Equal Employment Opportunity Commission, published in 2016 and titled Diversity in High Tech says that over time, more than half of highly qualified women working in science, engineering, and technology companies quit their jobs. The report goes on to say that although 80 percent of U.S. women working in STEM fields say they love their work, 32 percent also say they feel stalled and are likely to quit within a year. And, according to a study by the American Association of University Women, just 26 percent of computing jobs in the United States were held by women in 2013, down from 35 percent in 1990.

Why Haven’t We Made More Progress?

In an article that appeared in the Harvard Business Review (March 24, 2015), “The 5 Biases Pushing Women Out of STEM,” author Joan C. Williams points to bias as the force that pushes women out of STEM jobs, rather than pipeline issues or personal choice. Based on a survey of and in-depth interviews with women in STEM jobs, Williams concluded the following:

Leaving the Pipeline Early–Bias in Education

The Report goes on to say that women begin to leave the pipeline during their time at university. Although women enroll in graduate education at a higher rate than men, and have done so for the past 30 years, they receive bachelor’s, master’s, and doctoral degrees at a lower rate than men.

And here are some of the reasons why….

According to an article entitled “Why Women Quit Science” (on line title: “She Wanted to Do Her Research. He Wanted to Talk ‘Feelings.’”) written by A. Hope Jahren and published by the New York Times (March 4, 2016), “Women reported both isolation and intimidation as barriers blocking their scholarly path; and while 23 percent of freshmen reported not having experienced these barriers, only three percent of seniors did, suggesting that this reaction to women in science education is a lesson learned by female students over time.” Jahren goes on to say, “In a survey of 191 female fellowship recipients, 12 percent indicated that they had been sexually harassed as a student or early professional.”

Harassment, devaluation, and exclusion are powerful disincentives, especially when they are experienced regularly over time. The message women often receive as students and, if they survive their “educational” experience, on the job is not that they aren’t capable, but that regardless of their abilities, they are never going to be let in to the club.

There Is Reason for Hope

Tech companies that dominated the field early on, such as HP and IBM, were actually fairly diverse—IBM named its first female vice president in 1943. But today’s tech giants seem to have taken a step backward. Only about 30 percent of the employees at Facebook and Apple in 2014 were women, and the numbers for other tech giants are no better. The good news is that these and other tech companies are beginning to make their workplaces more diverse. For example, as a result of a concerted effort on the part of Apple, half of all recent hires at that company (2016–17) came from minority groups.

For the past five years, Google has published the Google Diversity Annual Report in an effort to better understand issues related to diversity, inclusion, and equity that exist inside the company, to gather and publish demographic and other relevant data, and to measure progress, which according to this year’s Report is accelerating. The Report is also part of Google’s commitment to greater transparency, responsibility, and improvement—the idea being that what you measure, and make public, gets changed.

Even universities are taking baby steps toward bringing women into introductory computer science courses—and presumably, into a major in computer science— by describing the courses in language more appealing to women. And it seems to be working: when UC-Berkeley changed the title of its introductory computer science for non-majors to “The Beauty and the Joy of Computing,” female enrollees outnumbered male ones for the first time ever. These changes won’t address the problems women face once they are in class, which were discussed earlier in this article, but it’s a start.