Why Women Are Underrepresented at the Top, and What Companies Can Do About It

By John Hackston At the start of 2020, there were more CEOs of S&P100 companies named John than there were women CEOS, and there...

At the start of 2020, there were more CEOs of S&P100 companies named John than there were women CEOS, and there were more directors named John, or Robert, or William, or James than all the women directors of these companies. In 2019, there were 33 female CEOS in the Fortune 500, the highest number ever, but this was still less than 7 percent. Direct sexism and prejudice no doubt play a part, but so can other factors, including personality. On average, women are more likely than men to have an interpersonally focused, values-driven decision-making style. At board level, this can be very useful—companies with female board members typically perform better—but individuals, especially women who display these characteristics, can be sidelined.

Since 2004, almost 1.8 million people have taken the online U.S. English version of the Myers-Briggs Type Indicator® (MBTI®) questionnaire (full disclosure: my organization publishes this assessment), also telling us their gender and job level. We therefore had a unique opportunity to see how personality differences may have contributed to female underrepresentation, and how this has changed over time. 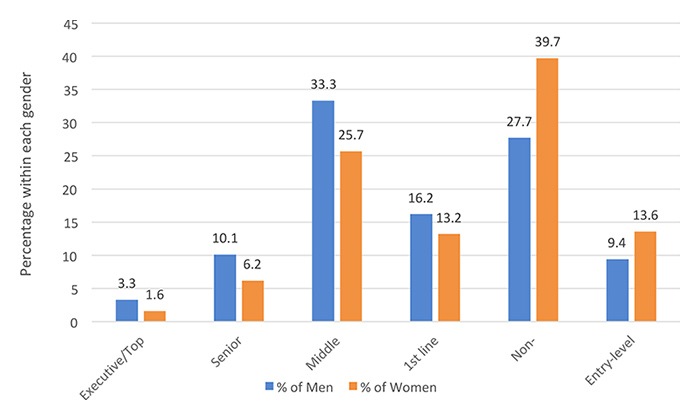 Though the proportion of women at senior levels increased from 2004 to 2018, they were still under-represented in 2018. In the chart below, the percentages show the degree to which women at the two highest levels were under-represented each year. For example, in 2004 only just over half (56 percent) the number of women that would be expected by chance reached executive level. 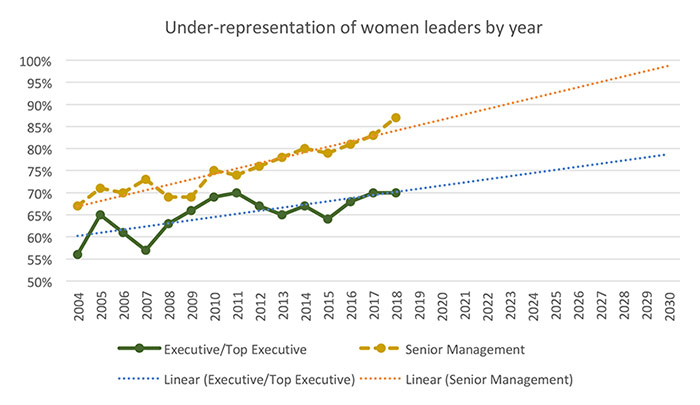 If these trends continue in a straight line as shown, then women might be fairly represented among senior managers by the early 2030s, and at executive level by 2070—50 years from now. However, that is almost certainly too optimistic. As the proportion of women approaches 100 percent of what it should be, there will undoubtedly be a leveling off. It is highly likely that women will not achieve fair representation at executive level this century.

To stem gender bias in hiring and promotion, start with personality data

To promote diversity, it may be most effective to start by appealing to your organization’s sense of self-interest in several ways:

Thinking and Feeling Modes Required for Sound Decisions. First, emphasize that while this is bad news for women, it’s bad news for organizations too. To make a balanced decision, you need to use both Thinking and Feeling modes. If you don’t consider how decisions will affect the people in your organization, you won’t take them with you, and you might not take your customers with you either. Teams and organizations that are more diverse make better decisions, and this may have a pronounced impact on customer and employee retention.

Institutionalize an Appreciation for a More Rounded Approach. On an individual basis, we can help managers and others to see that, for example, including a consideration of people and values in their decisions could be a useful and valid thing to do; a similar approach can be used to help teams see the importance of this approach. Moving up to the level of the organization is difficult but not impossible, especially if there is ongoing support.

This means that there is some light in this dark tunnel. While the underrepresentation of women and minority groups at senior levels is well-known, the interaction with personality and how it may adversely affect organizational performance will be news to many. HR and diversity specialists are well placed to promote awareness of these issues with their clients and, in so doing, help reduce barriers to advancement. Perhaps by appealing to organizations’ self-interest, we can promote diversity. 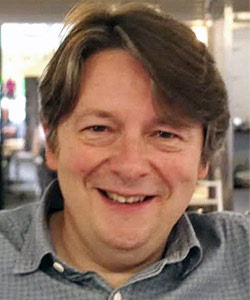 John Hackston, head of thought leadership at The Myers-Briggs Company, is a chartered psychologist with more than 30 years’ experience in helping clients to use psychometric tests and questionnaires in a wide range of contexts, including selection, leadership development, performance management, and team building.