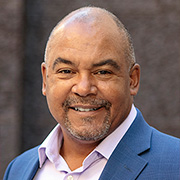 My Most Important Mentors Were My Parents

In 1960, my parents, Elijah, a young black man from South Carolina, and Margaret, a young white woman from Liverpool were married in Kensington, England. My father, who dropped out of high school to join the United States Air Force, would soon find himself providing for four young boys and a wife. He would move his family back to the United States at the height of civil rights tensions.

We were an Air Force family and we moved a lot. We were also an interracial family. That came with prejudice from both white and black people. My parents handled it with grace and somehow managed to soften its impact on us. They made us feel “normal” at a time when understanding our identity wasn’t easy.

After the Air Force, my father struggled to find work to support his family. My mother got a job, but with limited education came limited opportunities. My parents needed us to be independent, self-sufficient, and responsible. My proud father, who had seen so much in his lifetime—tours of duty in Korea and Vietnam, race riots in the States, and the reality of a limited education—laid out his goal for his children: finish high school and stay out of jail. That was it. That was the bar.

This backdrop had a tremendous influence on my career path. I finished high school with grades good enough to get into prestigious universities. But with no money for that, I attended a budget-friendly state college instead. I also poured myself into extracurricular opportunities like student government, residence leadership, and intramural sports, trying to maximize my college experience and crush this low bar set by my father. As a senior, I found myself starting to stress about a career. I kept thinking, “You finished high school, you’ll soon finish college, but how will you support a family like dad did?”

I graduated on a Saturday and began my new career the following Monday. Soon I was advancing from one job to the next, arriving at Liberty Mutual 18 years ago. I answered the question that plagued me in college about supporting a family, believing my degree was the answer. And in part, it was. But I also realized that my parents had already provided me an invaluable foundation: being confident and independent; self-motivated and determined; inclusive and compassionate; inquisitive and decisive; eager and persistent.

My career path could have taken many different forms, but it was always going to be defined by the qualities that my interracial parents imparted to their four boys and a bar that to some I’m sure is considered incredibly low. I can’t express the motivation that has given me.