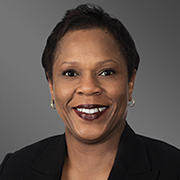 Education: JD, Texas Tech University School of Law; BA, political science, Southern Methodist University
Company Name: Greenberg Traurig, LLP
Industry: Law
Company CEO: Brian Duffy
Company Headquarters Location: Miami, Florida
Number of Employees: 4,309
Your Location (if different from above): Austin, Texas
Words you live by: You never know what someone else is going through, so be kind.
Who is your personal hero? My mother
What book are you reading? Caste: The Origins of Our Discontents by Isabel Wilkinson
What was your first job: Busboy in a cafeteria
Favorite charity: Local Austin, Texas, PBS TV station (KLRU)
Interests: Hiking, reading, and traveling
Family: 5 brothers, 4 nieces, 3 nephews, 2 godsons

It All Started with a Briefcase

When I was in third grade, my school hosted a Career Day event. One of the people invited to speak at the event was an African American female lawyer. I don’t exactly remember what she said that day, but I was entranced by something she was carrying with her—a briefcase! I had never seen anyone carry a briefcase, and as she prepared to speak to us at the assembly, I was intrigued by it and watched intently as she opened it up and pulled out papers that she used to give her presentation. My nine-year-old self fell in love with the thought of carrying briefcase to work every day, and decided that day that I wanted to become a lawyer when I grew up. I went home that night and proudly proclaimed this fact to my family.

Years later, as I continued to hold the dream of becoming a lawyer, I had the opportunity to meet and talk to attorneys, and realized that it was a career that I was well suited for. I enjoyed reading and writing, I was involved with debate, and I enjoyed meeting people. In college, I majored in political science, joined the prelaw club, and served in student government. I also had the opportunity to work part time in a small law office. These experiences helped solidify my decision to become a lawyer.

Once I got to law school, I had no idea what area of law I wanted to practice. However, I knew that I didn’t want to practice criminal law (it’s a long story). I took a broad range of courses in law school and clerked for several small law firms.

As my law school graduation neared, an economic crisis hit and there were very few legal jobs available. However, I was fortunate and found a job in the public sector, representing a city. That initial experience led to another job working for a large nonprofit trade association, which then led to my position as city attorney for the city of Austin, Texas.

On the day that I was selected as Austin’s city attorney, I thought back to that Career Day during third grade and realized I had achieved my goal of becoming a lawyer, even though I didn’t carry a briefcase to work with me every day. I also realized how important representation is in the legal profession. The ability to see myself in someone else at the age of nine was critical to my future. It piqued my curiosity regarding a profession I knew very little about, and offered me the opportunity to learn more.