Featured83
By Simona Scarpaleggia Some weeks ago, I was invited to take part in a panel debate. Being very familiar with such events, I asked...

Some weeks ago, I was invited to take part in a panel debate. Being very familiar with such events, I asked what the seating arrangements would be and was told there would be high stools. Since I am rather petite, I didn’t much like the idea of having to clamber up onto a high seat, with my legs dangling over the edge like a ventriloquist’s dummy—without the ventriloquist!

A conversation to that end took place, and the organizers replaced the stools with comfortable armchairs, and everything went off smoothly.

In this example, the decision to choose high stools was probably taken by an individual who unconsciously expected most of the panelists to be men, and therefore of a certain height. It is unlikely that they took into account that women are on average much shorter than men, or that a man or woman from Mexico or Vietnam is typically much shorter than someone from the United States or Western Europe. I also doubt whether they had considered what people might wear—a high stool might not be appropriate for a woman in a skirt. And I very much doubt they considered whether any of the panelists had mobility issues.

The point of telling you this story is that it is an example of unconscious bias, and the influence unconscious bias has on our attitudes and behaviors toward other people. It can influence key decisions in the workplace and can contribute to inequality, especially in terms of recruitment, appraisals, or promotion.

Unconscious bias is nothing new. Back in the 1940s in the UK, newly built aircraft were ferried from the factories to their frontline squadrons by pilots of the Air Transport Auxiliary, many of whom were women. There is a famous story of one enormous four-engine aircraft landing at an airfield where a party of men waited to greet the pilot. When a very petite young woman clambered out the back, the men remained standing, refusing to believe that she could have flown such a mighty aircraft, or any aircraft for that matter. Only after some time, and when no one else emerged, did they finally believe she must have been at the controls.

In more recent times, a woman in the United States recounted her experience parking in a Veterans and Military parking spot. As she got out of her car, she was confronted by a man who shouted, “That spot is for vets, ya know!”

“I know,” she replied. “It’s nice to be appreciated. Women have been serving for decades!”

Unconscious bias manifests itself in other ways that impact our daily lives. A study by two Dutch scientists at Maastricht University in 2015, for example, found that most offices set their thermostats based on the resting metabolic rate of a 40-year-old man. This is done in accordance with standard indoor air-conditioning guidelines that date back to the 1960s and have never been updated. Because women tend to be smaller and have more body fat than men, they have slower metabolic rates. Which means current air-conditioning standards are too cold for most women.

To be clear, unconscious bias is not limited to gender. It also arises in relation to ethnicity and other visible diversity characteristics such as height, body weight, and even names. Our brains unconsciously make quick judgments and assessments that are influenced by our background and personal experiences, as well as our concept of societal stereotypes.

Typically, bias falls into one of four categories:

This is a bias in favour of people we like and immediately identify with. It often manifests itself in recruiting where we favor a candidate we see as the right “fit,” when actually, we should value diversity and consider what a particular individual will bring to the team.

Having perhaps decided to recruit an individual in our own image, we then seek to confirm that we have made the right choice by looking for information that supports our decision and ignoring information that doesn’t quite fit the narrative we have formed. This can, of course, lead to challenges down the road if we choose to overlook an issue that subsequently becomes a problem.

The halo effect comes when our positive perception of an individual makes us see everything he or she does as great—effectively giving our chosen candidate a halo. This can be dangerous and mean that we ignore other aspects of an employee’s character or performance that could become an issue, or that we fail to pay attention to formal appraisals.

The horn effect is the direct opposite of the halo effect. Instead of only seeing the good in someone, we only see the bad, and focus on their negative traits.

ELIMINATING THE BIAS BY “UN-BIASING” THE PROCESSES

So, in management, how can you address the issue of unconscious bias and learn to make the right decisions for your colleagues, your business, and you?

The key point is one of being honest with yourself, which is not always easy. We all know of examples over the years where we may have had favorites or championed one individual over another. To address unconscious bias, it is essential to recognize and understand which biases you may have, because of your experience, your gender, your sexual orientation, and your own social background. Discussing the issue in an honest and open forum and raising one’s awareness of unconscious bias is the best way of starting to mitigate against it.

This will certainly help from a personal point of view, but it won’t mean that bias will disappear. Indeed, quite the opposite. Leaving the issue of bias to a myriad of individual considerations and preferences serves to fuel the subjectivity of decision-making, and in no way contributes to a structured process. The best way to create a more effective, sustainable solution, is to un-bias the process.

This means that when hiring, promoting, assigning projects, or even organizing the seating at a conference, an organization needs to have a proper process that is designed to be neutral, and takes into account how we all differ.

Let me give you some examples:

The list could continue. There is so much that can be done that will help an organization to create a more equitable workplace and a more effective one too.

Being aware of unconscious bias will open a new world of opportunity to you and your business. It is not simply about ensuring that you lay out the right furniture the next time you’re hosting a conference or panel debate, but rather that you’re ensuring that you enrich your organization with a more diverse team, with all of the benefits that will bring. 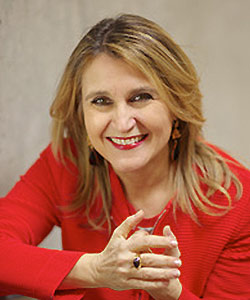 Simona Scarpaleggia is a Board Member of EDGE Strategy, which is a global leader in Diversity, Equity & Inclusion (DE&I), providing organizations with an integrated SaaS-based DE&I solution – EDGE Empower – which brings the power of the latest tech, expert knowledge and experience, and independent verification and certification into a single solution. Simona has more than four decades of experience in FMCG and Retail, she is a former CEO of IKEA Switzerland, and a former co-chair of the United Nations (UN) High Level Panel on Women´s Economic Empowerment. Simona is a mentor and author, and a regular panelist and speaker, making the case for investing in DE&I and the benefits of improving gender and intersectional equity in the workplace.