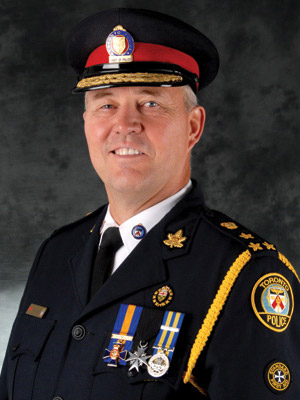 I have been a police officer in the city of Toronto since 1976 and Chief since 2005, and I am honored to serve the residents of Toronto by providing them with effective, bias-free policing. Toronto is one of the most culturally diverse cities in the world, and the Toronto Police Service is fully committed to working with all of its residents in a respectful and equitable manner. In 2006 the Toronto Police Service created a Diversity Management Unit. This was a first in Canada, and we are still the only police service with such a unit. Our mandate is to coordinate human rights issues and activities across the service and address barriers and gaps in order to create a more inclusive workplace for all our members.

In March 2007, I committed to a three year project whereby the Toronto Police Service worked alongside the Ontario Human Rights Commission with the goal of identifying and eliminating discrimination in our employment practices and in our delivery of police services to the public. The project recently concluded, resulting in many positive changes for the Service and a legacy of greater awareness of, and commitment to, human rights issues.

The Service has been awarded the Canada’s Best Diversity Employers award for three consecutive years: 2008, 2009 and 2010. This award recognizes employers that have exceptional workplace diversity and inclusion programs.

In 2009 we were recognized by the American Psychological Association as a best practices honoree for the creation of a formal promotional mentorship program – created in response to an awareness that minority group members of the Service were underrepresented in the supervisory and senior officer ranks.

In 2010 the American Psychological Association again recognized our achievements with the Healthy Workplace Award in our category.

In 2008 the Service approved the formation of internal support networks. These groups provide support, create networking opportunities and enable knowledge sharing and skill development for many different cultural groups within the service and ensure that we have an inclusive and welcoming work environment for our members.

In closing, I want to recognize my employment unit for taking significant steps to overcome barriers that traditionally prevented some members of the city’s diverse community groups from choosing a career in policing. Their efforts have been very effective and have resulted in the Service becoming increasingly reflective of the city’s population.

I am proud of my members’ accomplishments and of the opportunity to continually improve service to both members and the citizens of Toronto.