Cullen Jones “Dares to be Different”

As Jones relates, “I was actually introduced to swimming because I almost drowned. It was a normal weekend, and my parents decided to take me to a water park. I was very excited. Towards the end of the day, my dad wanted to get on the largest water ride there, and I wanted to follow suit. It was an inner tube ride, so the point was to hit the pool at the bottom and gently coast over to the shallow end. I was too light, and I flipped upside down. I ended up going under [the water] for a full thirty seconds.” A lifeguard performed mouth-to-mouth resuscitation on the then-five-year-old Jones.

The near-fatal waterpark accident proved to be a defining moment for the future Olympian. Placed into lessons at the local Irvington, New Jersey YMCA, Jones began swimming regularly. At the age of eight, Jones saw his first meet, and was instantly hooked by the competition. He began swimming with clubs in the New Jersey area, often on all-white teams. By the time he was 11, Jones knew he had a passion for swimming.

“There was one kid who kept on beating me, and I told my mom, ‘This is my passion. I got to beat this kid.’ I knew at that point that this is what I wanted to do,” said Jones.

As opposed to other Olympians and elite athletes, whose talents are often spotted early in their youth, Jones’ was not. According to the swimmer, he was a “late bloomer.”

“It took me a while. I had to work really hard to be successful at swimming. The first time I thought I was good enough to even go to college I was in my junior year [of high school],” said Jones.

Swimming at North Carolina State University provided Jones an opportunity to hone his skills. He set himself apart with his performance at the 2005 World University Games in Turkey. By his senior year, he was ranked nationally and won the NCAA Division I Championship in the 50-yard freestyle. With backing from Nike, Jones turned professional in 2006. 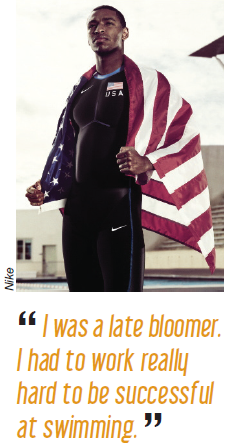 That year, Jones made swimming headlines at the Pan Pacific Swimming Championships, setting off his professional career. Jones’ efforts won him the Golden Goggles’ “Breakout Performer of the Year.” The following year, Jones won a gold medal in the 4×100 meter freestyle at the 2007 World Aquatics Championships. From there, he broke records in his individual event at the 2008 Olympic swimming trials.

These achievements culminated in August 2008 in Beijing, where the team of Jones, Michael Phelps, Jason Lezak, and Garett Weber-Gale won the gold medal in the 4×100 meter freestyle relay. This made Jones only the second African American in history to win a gold medal in swimming.

To Jones, treating the games as any other meet helped ease the intense pressure of the Olympics. “I had watched the Olympics and I always wanted to go, but I never knew it was possible for me. I grew up in the inner city; I was just a kid from Irvington. At the [Beijing] Games, I was kind of a deer in headlights; I was really excited about it. I think the reason why I was able to perform as well as I did was because I had the same mentality that it was just another meet. There’s a lot more on the line, but you can’t think of it that way,” said Jones.

“After everything transpired and the race was over, that’s when I started to take in the fact that I was at the Olympics and I had won a gold medal. Being able to be on the stand and listening to your national anthem is something that’s hard to put into words, but definitely a highlight of my life.”

Jones often travels with his gold medal, showing it at speaking events to corporations and kids. Jones sees the effects it has on children in particular.

“I had a couple of people in my life that inspired me. You always wanted as a kid to meet those types of people. As an Olympian, I’m able to meet a lot of people I looked up to, Michael Jordan being one of them. That kind of impression that he had on me, I’m noticing that I’m having that on these kids,” said Jones.

While Jones embraced his role model status early on, he soon realized that his newly-found celebrity could be used as a platform for worthy causes. (Being a gold medalist isn’t without its individual perks, though: Jones appeared on Oprah in 2008 and the following year judged the Miss America pageant.)

What followed seemed like a natural fit for the African-American swimmer who once suffered a near-fatal drowning incident. In 2009, Jones joined forces with the USA Swimming Foundation and Phillips 66 to promote water safety among minority and urban populations. In doing so, the Make A Splash initiative was born.

Jones was motivated by startling and preventable statistics. 2010 research by USA Swimming shows that nearly 70 percent of African-American and 58 percent of Hispanic and Latino children do not know how to swim. In particular, African-American children drown at rates three times higher than white children. Through Make A Splash, Jones has traveled throughout the country publicizing these facts and promoting the availability of low- to no-cost swimming lessons in urban areas, often hopping in the pools to give kids lessons.

“The statistics were hard for me to swallow, but it became very real to me. Looking at my own family, there are people that don’t even know how to swim. We have to change this. There’s a simple way to change the drowning rates, and it’s [through] swimming lessons,” said Jones.

Indeed, Make A Splash is just another part of Jones’ goal of changing African Americans’ minds about swimming. Historically, discriminatory practices and racist theories prevented many African Americans from swimming. The scarcity of public pools for blacks kept the sport from entering their recreational culture, according to Jeff Wiltse’s Contested Waters: A Social History of Swimming Pools in America. Jones believes exposure is the most important way to change these attitudes.

“The more and more people that are exposed to it, [the more they] look at it in a different light. There’s also been a huge stereotype that African Americans don’t swim. I’ve been trying to fight this stigma when it comes to swimming. That’s definitely the point of Make A Splash. It’s to try to change the perception of swimming. It’s not only an activity, but it’s a life skill, and it’s something everyone can do,” said Jones.

Beyond Make A Splash and his speaking engagements, Jones’ other focus outside the pool is fashion. He hopes to follow in the footsteps of other athletes like Venus Williams, Maria Sharapovna, and hockey star Sean Avery who have successfully made the transition into the fashion industry. Don’t think Jones is ready to retire though. While working in fashion, whether as a buyer or a designer, is one of his dreams, Jones insists that swimming comes before anything else.

In the months up to the Olympics, training is the most important aspect of Jones’ daily life. Based in Charlotte, Jones often logs six hours in the pool at a time. Some days involve double practices sandwiched between time in the weight room. The 40-hour per week regimen means thousands of calories consumed. The 6’5”, 210 lb. swimmer laughs off the notoriously large appetite of elite swimmers. “We definitely consume a lot of food. That’s not a myth,” said Jones. “I’ve seen Michael [Phelps] eat a lot. But I definitely watch what I eat when it comes to ‘game time.’”

For Jones, remaining competitive at ‘game time,’ through proper nutrition and training, involves discipline. He hopes to follow swimmers like Dara Torres who have remained relevant into their 40s. While he hesitates to announce his future Olympic plans, competing in Rio de Janeiro at the age of 32 is definitely on Jones’ mind.

“I would love to swim in Rio, and represent my country at 32. I still love the sport, and I love what I’m doing,” said Jones.

This is in contrast to many Olympians, who find themselves burnt out after years of training, retiring when they finally receive their medal. For the most part, swimming is still very much a passion for Jones, although sometimes he imagines what it would be like to lead the life of a normal 28-year-old. “You do want to have that time, hanging out with friends on Friday night. But I think it’s something that we’ve been doing for so long that it’s a part of our lives,” said Jones.

For Jones, this dedication to swimming has also taught him valuable life lessons.

“Having that kind of lifestyle really teaches you time management. Understanding how to go after a goal and make that goal real is something that swimming also teaches you. It keeps you focused. To stay in that type of shape, to train at that level that you want to be at, it takes a lifetime of commitment,” said Jones.

Above else, Jones wants to promote his message of “daring to be different.” As a pioneer in swimming, he hopes to encourage more African Americans to swim competitively and at elite levels. “I’ve seen more kids come to swimming because they’ve seen me swimming. I’m thankful for that,” said Jones.

And through his work with Make A Splash, Jones hopes to make an even greater difference in the African American community. “Over the next couple of years, hopefully in my lifetime, we’ll see the drowning rates decrease, and we’ll see more kids of African American descent coming to swimming.”