Hispanic or Latino: Which is Correct?

Most government records and the U.S. Census use the term Hispanic. On the newsstand, one finds Latina and Latino magazines. The use of Hispanic...

By Grace Austin and Damian Johnson

Most government records and the U.S. Census use the term Hispanic. On the newsstand, one finds Latina and Latino magazines. The use of Hispanic or Latino has become an unsettled issue among the Hispanic/Latino population. So which term is correct to use?

The Hispanic population numbered 50.5 million in 2010. Hispanics accounted for over half of the population change from 2000-2010, according to the U.S. Census Bureau. The nation’s fastest-growing minority, the Hispanic population is growing exponentially in the United States, and its buying power and cultural presence is increasing as well.

Studies have shown the term Latino is gaining acceptance among Hispanics. However, a presidential tracking poll conducted by Hispanic Trends, Inc. reported that a significant majority of Hispanics still prefer the term Hispanic.
The term Hispanic alludes to a person’s place of origin, referring to persons from Mexico, Puerto Rico, Cuba, Central and South America. These areas were all conquered and settled by the Spanish and originally called Hispania, a term initially coined by Romans to refer to the Iberian Peninsula.

Hispanic was first used on the 1970 census, introduced by the Nixon Administration for demographic clarification reasons. This was the first time the group was officially acknowledged by the U.S. government.

“Hispanic refers to place of origin regardless of race. For example, what I have found with people [filling out] the census is they have to check the box for Hispanic, and then race. But [Hispanic] does link back to Spanish-speaking countries and where Spain was the former colonizer,” said Dr. Kimberly Simmons, director of Latin American Studies at the University of South Carolina. 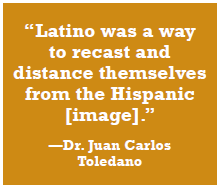 In contrast, Latino refers to a group of people who lived in the conquered Roman provinces and regions where the Latin language took root, usually called the Romantic languages: French, Spanish, Italian, Portuguese, Romanian, Catalan, and others. Thus, Latino refers to France, Spain, Italy and other regions where these languages are spoken. Nowadays, though, the definition has come to refer to Latin Americans, although its origins can be traced to the former Roman Empire.

“All Hispanics are Latinos, but not all Latinos are Hispanics. [For example] Brazil, being a Portuguese-settled company, is not Hispanic, but is Latino,” clarifies Simmons.

Latino originally was seen as anti-indigenous when it was invented by Spanish-American exiles in Europe in the late nineteenth century, according to Ilan Stavans, co-author of What is La Hispanidad? Some intellectuals viewed it as a “cover-up for the false homogeneity” on the continent. The term later gained popularity in the twentieth century.
Latino has become a self-identifying and unifying word in recent years for many of the peoples in the Western Hemisphere, especially in the United States.

“For self-identification, I think there’s more of a movement and a shift to say Latino in the United States. Latino has become a way to unify the different groups in Latin America, the children of those who are here from different countries, under a larger umbrella,” said Simmons.

Nowadays, Latino has become the most politically correct term. To some, Hispanic has negative connotations, including gang participation, unemployment, and low degrees of education, according to Lily Benjamin, VP of Organization Development and Diversity at Broadridge Financial.

A similar word, Chicano, is viewed as a derogatory term for some, and a label of pride to others.

“The term, first intended to degrade, was not coined by Mexican people, but by whites and other races. It referred to people of Mexican heritage but was intended to be disrespectful, labeling Mexicans as an inferior class in society,” said Broadridge.

Others, like Toledano, have a different point of view on the term. He compares it to the cultural shift from identifying as ‘black’ to ‘African-American’ in the African-American community.

“In general, for the Chicano population, it became a word of pride. In the ‘50s and ‘60s, Chicano becomes this word that gives you the power to be part of a community you are proud of. But that didn’t mean there weren’t issues with the rest of the population [using the word].”

“Maybe [because of] media or films, when you say Hispanic we think migrant workers. If you say Latino, the images that come to mind are music, the explosion of salsa [music], or maybe food. It’s not weighted down with the other things [affiliated] with Hispanic. Latino was a way to recast that and distance themselves from the Hispanic [image],” said Simmons.

On the other hand, Toledano sees these Latino stereotypes as sometimes untrue.

“One of the stereotypes is that Latin people are always dancing and having parties. To some degree, the Hispanic culture is outdoorsy and we have many parties, and it is a happy culture, but that doesn’t mean that everyone knows how to play guitar and dance the salsa,” added Toledano.

Regional differences often explain the usage of Latino or Hispanic. In a federal report by the Executive Office of the President’s Office of Management and Budget, the government found that Hispanic is often used in the East, and Latino commonly used in the West.

To most Hispanics/Latinos, either label is a personal preference. Often, though, those that may fall into the Hispanic/Latino demographic would choose to identify themselves by their country of origin.

For the growing Hispanic/Latino population, a permanent name is still being debated. What is certain, though, is the demographic’s increasing prominence in society and the economic market. Hispanic or Latino, this heterogeneous group continues to play an important part of diversity in the U.S. and on a global scale.