Gender11 webexclusive36 webonly38 Women88
Women hold the majority in the global population; the majority who are earning baccalaureate and advanced degrees but are still woefully underrepresented in positions...

Women hold the majority in the global population; the majority who are earning baccalaureate and advanced degrees but are still woefully underrepresented in positions of power. We see this dynamic changing rapidly not only because of the demographic reality but because of the global economic imperative to level the playing field.

There were a number of defining moments for women in 2012:

• In February 2012 the Defense Department opened up 14,500 positions to women that had previously been limited to men and lifted a rule that prohibited women from living with combat units.
• Fortune 500 board seats held by women in the US went from 16.1% in 2011 to 16.6% in 2012
• Women on corporate boards in the European Union rose from 11.8% in 2010 to 13.7% in 2012
• Women now earn almost 60% of university degrees in the USA and Europe.
• Women’s reproductive rights issues were debated heavily in the U.S. 2012 Presidential campaign and by and large women were victorious in maintaining their right to choose.
• When Marissa Mayer was named CEO of Yahoo in July 2012 (making her the 20th female Fortune 500 CEO) and shortly thereafter announced that she was pregnant, the media was all abuzz with questions of her ability to be a CEO and a good mother. This was a defining moment in shifting stereotypes about women CEO’s and paradigms of “right and wrong”. Would anyone ask if a man could be a good father and CEO?
• The newly sworn-in 113th U.S. Congress has 20 female senators and 82 female representatives, a record number.

Other global trends for women that are compelling:

• According to a 2012 study by Booz and Company, an estimated one billion women are expected to enter the global workplace in the next decade. The report asserts that the increase in women in the workplace would not only contribute to gender equality but would also positively impact global economic growth.
• A 2011 Grant Thornton International Business Report revealed:
o Women hold 20% of senior management positions globally, down from 24% in 2009 and up only 1% from 2004.
o Women have seen the most progress in their share of senior management roles in Thailand, Hong Kong, Greece, Belgium and Botswana, where the percentage of women has risen by at least 7% since 2009.
o Globally, only 8% of companies have a female CEO. In Asian economies, Thailand leads the way with 30% of companies employing female CEO’s followed by China (19%), Taiwan (18%) and Vietnam at 16%.

The data is compelling and now fairly plentiful that shows companies with women in leadership positions outperform those that do not. 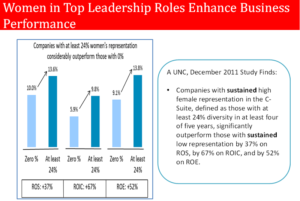 While gender issues have been at the forefront of D&I initiatives for almost three decades now, the data show that progress is slow and in some cases stalled. According to Kathryn Kolbert, director of the Athena Center for Leadership at Barnard College, women’s advancement has flat lined in recent years, “We made great progress in the 1970’s and life has changed significantly, but progress for women has plateaued in rights, in leadership and in the ability to contribute equally in social and cultural affairs.”

Globally, women’s progress varies vastly depending on the region of the world. There is a lot of attention in Europe, with some countries having passed or considering passing legislation for quotas for women on corporate boards. In other areas such as parts of Asia and Africa, the plight of women is dismal.

Woman’s activist Gloria Steinem said that she believes the reason we are stalled is that resistance comes at two points in a change effort, at the very beginning and at a point where it looks like a critical mass, in this case women, will outnumber the existing power base. She believes we are at the second point of resistance.

We might say 2013 is a tipping point for women! D&I practitioners need to focus on why progress is stalled (if that is the case in your organization) and aggressively advocate for equal pay, upward mobility, and the compelling business case for ensuring that women are represented at all levels of your organization.