Government57 Women88
It is not always clear why women are often stifled by the campaign trail, but failing to feel qualified, fears of criticism from a...

It is not always clear why women are often stifled by the campaign trail, but failing to feel qualified, fears of criticism from a sexist media, and simply not being asked as frequently as men could be reasons enough.

For women it is not easy to open themselves up to complete exposure, especially during election seasons, with contested races and polarizing phrases like “war on women.” Republican candidate Mia Love faced a tough race vying for Utah’s fourth congressional district seat.

“This so-called war on women is absolutely a diversion. We all know it,” Love says. “We have been talking about this for a while—because nobody wants to talk about the record. But the issues facing women are facing all Americans: unemployment, educating our children, being in debt, and threatening our sovereignty. These issues don’t have color. They certainly aren’t discriminative. They don’t target gender or a social income class. They are issues that face all Americans.” 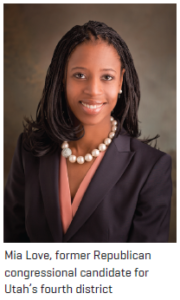 The current Saratoga Springs mayor was a sensation as the potential first Republican black female congresswoman. The Republican Party was enamored by Love, inviting her to out-of-state campaign events and even granting her the podium at the 2012 Republican National Convention. Unfortunately for the GOP, Love lost to incumbent Democratic Representative Jim Matheson by fewer than 3,000 votes on November 6.

Even without Love, historical records were broken during the 2012 election—there are now twenty women in the Senate and eighty in the House of Representatives.

According to the Center for American Women and Politics (CAWP) at Rutgers University, 184 women were on the ballot in 2012. The House broke its 2010 record of 141 female candidates with 166 this past November. The number of female senatorial candidates increased from fourteen to eighteen.

Total Senate filings by women remained the same (thirty-six), whereas the House broke its record of 262 filings by more than thirty additional female candidates.

The triumphant outcome for women marks a change in the campaign process. But the current numbers are only scratching the surface, with women now representing only 18 percent of Congress.

“Research—both ours and that conducted by others—shows repeatedly that compared to their male colleagues, women bring different issues to the public agenda and make different issues their priorities,” Kleeman says. “Women are more likely to address concerns of women, children and families, and this is true across party lines, although women at different ends of the spectrum may define what would be good for women, children, and families differently.”

The Women’s Campaign Fund (WCF) Foundation in Washington, D.C. is a non-partisan organization dedicated to advancing women as political candidates in state, local, and federal elections. They influence elections through their WCF pro-choice candidate endorsement program, political action committee (PAC), and sister organization, the She Should Run Foundation, to break down barriers keeping women from politics.

Organizations like WCF exist because more education and awareness is needed to change the political landscape, says Clare Bresnahan, programs director at WCF and She Should Run.

“A woman candidate has a unique ability to connect with voters on a personal level, which is a very important skill for a candidate to have,” Bresnahan says. “Voters, both men and women, tend to trust women candidates on the economy, because women understand everyday issues.”

Even though women are optimal candidates, their participating numbers are fewer than their male counterparts. WCF’s She Should Run Foundation identifies three main deterrents—women are not asked to run, media sexism, and lack of contribution funds—and offers unique programs to better prepare candidates for these issues.

One of the foundation’s programs, She Should Run In Action, “provides a tool to formally ask women to consider entering public life,” according to the She Should Run website.

“Women often worry that they aren’t qualified or don’t know enough,” Kleeman says. “We and others are doing all we can to provide training in the specific campaign skills that are necessary. We’re encouraging all kinds of women to take advantage of that training.”

However, even if a woman is asked to run she still faces the disadvantage of male opponents ready to make jabs based on gender. Former Ohio Secretary of State (the first female to hold the position) Jennifer Brunner encountered misogynistic attacks when she ran for Senate in 2010 against colleague and then-Lieutenant Governor Lee Fisher.
“It was very hurtful,” Brunner says. “I kept saying it’s a part of my race, but it was an eye-opener. I remember being in my thirties thinking we’re all equal, but the higher up you get the thinner the air gets. Men don’t want a woman there because they can’t embrace what’s that like.”

Fisher’s campaign went so far as to go after Brunner’s family while campaigning. He went on to defeat Brunner in the Democratic primary but lost in the election to Republican Rob Portman. Now Brunner is an attorney and partner at the Brunner Quinn law firm. She recently wrote the book Cupcakes and Courage about her political experience.

The She Should Run Foundation also promotes awareness on media sexism, which for years went unchallenged by female candidates. It partners with the non-partisan project Name It Change It, which exists “to end sexist and misogynistic coverage of women candidates” by the press. Another program within the foundation is a research study, Vote With Your Purse, which examines female political giving trends.

“Political giving is just as important as voting and volunteering,” Bresnahan says. “If you want a woman candidate to win she needs to have the money to run a great campaign and get her message out.”

While there remains many barriers to women advancing in politics, there are signs that the face of Washington is changing. And with the help of women and women’s political organizations everywhere, regardless of political affiliation, we can move toward America becoming a country that truly represents its constituents.