Education62 Nonprofit62
Teach For America puts the power of returning veterans to work in our nation’s classrooms.

Teach For America puts the power of returning veterans to work in our nation’s classrooms.

Teach For America teacher in classroom

In the U.S., millions of children growing up in poverty don’t have access to the kind of rich learning experiences, high expectations, and ongoing opportunities that would enable them to succeed in school. As a result, only about 10 percent of the poorest students graduate from college compared with 54 percent of their middle- to high-income peers. And many educationally underserved children become adults who remain caught in a cycle of poverty.

Leveling the Field
Teach For America (TFA) was created to help eliminate that educational inequity by providing intensive training and ongoing support to help would-be teachers understand, and meet the needs of, America’s most underserved students. In return, corps members agree to teach for two years at one of many high-need locations across the country. An amazing 11,100 TFA corps members will reach more than 750,000 students this year alone.

The program has lived up to its founders’ expectations. Recent national studies, as well as statewide studies in Louisiana, North Carolina, and Tennessee, concluded that Teach For America corps members are as or more effective than other new teachers.
Many of the more than 32,000 TFA alumni continue to work in the classroom, school administration, policy and politics, and other areas to ensure that all of America’s children receive an excellent education. TFA was recently named one of FORTUNE’s Best Companies to Work For. This is the fourth straight year TFA has made the cut, and why more than half of its employees are alumni who have chosen to stay with the organization.

A New Kind of Service 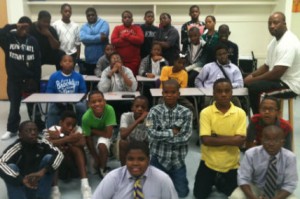 Shaun Murphy (right) with a group of his students.

By 2009, Teach For America had been recruiting and training teachers for nearly two decades, and Shaun Murphy had been on active duty with the U.S. Army for eight years. While this highly decorated staff sergeant was thinking about the next step in his career, his girlfriend at the time—a TFA corps member—told Shaun he should take his leadership skills into the classroom. Her words set him on a new path.

He joined Teach For America and spent two years teaching at Prestige Academy Charter School in Wilmington, Delaware. Once his classroom commitment had been met, Shaun asked whether there was a position available that would enable him to bring more veterans into the classroom. There wasn’t. But just one year later, TFA was ready to create such a position and launch a whole new initiative. When Shaun heard of TFA’s plans, he put together a proposal that included the creation of a national campaign to reach this largely untapped audience. A short time later, Teach For America named him their new manager of professional recruitment for the military sector.

“I threw my full weight into recruiting veterans and convincing them of their value as teachers,” says Shaun. “Many veterans told me that teaching is something they’d always wanted to do, but never thought they’d have a chance to do. Now, we have nearly 200 veterans who have gone through the program since 2008.”

Winners All Around
Since “You Served For America, Now Teach For America” was launched in 2012, the initiative has been successful in recruiting, training, and sending veterans into some of the nation’s highest need schools. And all indications are that students are benefiting from their exposure to this group’s experience, leadership, and desire to continue to serve.

Of course, the students aren’t the only ones who benefit. Teach For America is part of a broader effort to help returning veterans find their next opportunity. Initiative partners include Joining Forces, Got Your 6, Iraq and Afghanistan Veterans of America, Troops To Teachers, and the Corporation For National and Community Service.

In 2013, more than 100 teachers with military experience served as Teach For America corps members. By 2015, the program expects that up to five percent of its incoming corps members will be veterans.

Click here to learn more about Teach For America. 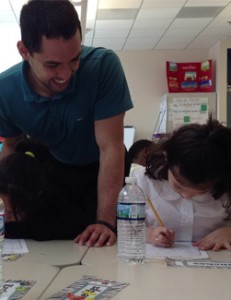 After a five-year stint with the U.S. Marine Corps, where he served as a signals intelligence operator and analyst, Sergio Santiago earned his bachelor’s degree in education at Penn State. He wanted to teach where he was needed most, so he joined Teach For America.

Now he is a second grade dual language teacher at Powell Bilingual Elementary School in Washington, D.C., where he teaches reading and writing in English and Spanish.

“As a Marine, I was serving my nation,” says Sergio. “In many ways, this job is similar—my students and my family depend on me. The consequences of my actions are just as critical and the rewards are just as great…and I have to work just as hard.”

Sergio lives in the neighborhood where he teaches (and coaches soccer), which helps him build strong relationships with not only his students, but also their families. And when he’s not teaching, coaching, or spending time with his own family, Sergio attends George Mason University, where he is earning his master’s degree.