Education62
By Noelle Bernard For more than 40 years, Niagara University has helped students pursue roles in service and management careers through its renowned College... 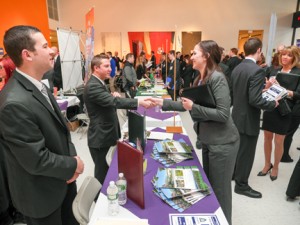 Career Fair at the School of Hospitality and Tourism Management

For more than 40 years, Niagara University has helped students pursue roles in service and management careers through its renowned College of Hospitality and Tourism Management.

Nestled a few miles from the Canadian border and the rushing waters of tourist hot spot, Niagara Falls, the university offers a profound experience for undergraduates.

Niagara University’s College of Hospitality and Tourism Management is ranked among the top 20 programs in the US. In 1968, it became the first university in the world to offer a bachelor’s degree in tourism. It was also the seventh program in the country to be accredited.

“We do everything possible to make our students marketable in the best possible job in the industry, including bringing the best employers in the industry face to face with them,” said Gary Praetzel, dean of the College of Hospitality and Tourism Management.

The college offers Bachelor of Science degrees in hotel and restaurant management, tourism and recreation management, and sports management.

Students are immersed in the industry through study abroad programs, 800 hours of approved work experience, the college’s annual career fair, and guidance from active alumni. “The way the program is designed is great because it gives you so much experience,” said Claire Hogan, a Niagara University 2012 alumna. “That [800 hour requirement] gave me an opportunity to do three separate internships in different areas to see where I wanted to be in the industry.”

Students are also given opportunities to work abroad at luxury hotels in Peru and Lake Como, Italy, or even participate in a dual degree program in Germany. While at Niagara, Hogan was selected to spend a summer semester in Lake Como, Italy, and complete her final year in Germany, earning a dual degree. She currently works for McDonald’s corporate office in Chicago.

Evan Hanrahan, a 2008 graduate who recently became a senior event manager at the Hilton San Francisco Union Square after working for the Waldorf Astoria Hotel in New York City, says that Niagara University sets students up for success. “Whenever we would interview a Niagara student who had gone through the international programs for a job at the Waldorf, there was just a very clear understanding that they had been put through the paces and we felt comfortable that they could keep up with the pace and energy required at a big hotel like ours.”

Amy Domiano graduated from Niagara University in 2012 with a Bachelor of Science degree in Tourism Management with a concentration in Marketing. She is now working in New York City with Related Companies as a Hospitality Coordinator for The Shops at Columbus Circle—Time Warner Center. “My experience in the College of Hospitality and Tourism prepared me not only from an educational standpoint, but also forced me to adapt quickly to change and not be afraid to take a leap of faith when it comes to accelerating your career and moving away from everything you know,” Domiano says.

The success of the College of Hospitality and Tourism Management rides gracefully on the shoulders of Praetzel, whom alumni praise for his mentorship and passion. However, early in 2014, Praetzel announced his retirement after serving at the university for 35 years.

“He tried to get students to branch out and do things that would elevate the entire program and make Niagara University’s College of Hospitality and Tourism something that people respected,” Hogan said. “I’m so grateful for him, because without his guidance and help, I wouldn’t be here at McDonald’s—a superb company. I really owe it all to him.”

According to Hogan and Domiano, beyond Praetzel’s industry expertise, it was his accessibility that brought students in and kept alumni actively involved. “The impact and the guidance he provided throughout my four years at Niagara were unlike any other,” Domiano said. “I could turn to him for any concern or situation, and I knew he would steer me in the right direction. The success of his students is a huge testament to him and the College of Hospitality.”

Praetzel’s connection to students goes beyond graduation day. Alumni admit they still reach out to him for guidance and encouragement. “He has absolute faith in every student who walked in his building—that they have the potential to get where they want to go. I’ve never met someone as selfless as he is. He always puts everyone first,” Hanrahan said. “Not only did he do everything he could to set the students up for success, but he did everything he could to set the school up for success.”

Despite losing Praetzel, Hanrahan believes the College of Hospitality and Tourism Management will remain strong. “While I’m sure the school is going to miss him greatly, I also feel it would be a discredit to him to think that there is any concern as to the program moving forward. He deserves all the credit in the world, and certainly deserves some peace and quite for a little while.