Maestra Sonia Marie De Léon de Vega has achieved distinction as a Latina in a traditionally male-dominated occupation—conducting. De Léon de Vega has not only become world renowned for her skills on the podium as a music director and conductor, but she has created her own organization—the Los Angeles-based Santa Cecilia Orchestra—which is the only orchestra in the nation with a specific mission to share classical music with Latino communities.

“I noticed that it just wasn’t a part of [our culture]. Music was cut in school, so kids did not grow up with this kind of music. When I started guest-conducting, I went to Italy and Mexico City—the concerts were full of families. In Mexico, they had access to classical music there, but not over here. So I thought, ‘I’d like to create that in my city and my community. I’d like to put music in their lives.’ I don’t think it should be exclusive to anyone because of their economic status. I wanted to make it accessible,” said De Léon de Vega.

Born in San Antonio, De Léon de Vega is the daughter of actress/producer Sonia De Léon and singer/guitarist Reynaldo Sanchez. At the age of four, De Léon de Vega moved to Los Angeles, California, where she was raised and began her musical training, becoming an accomplished pianist and organist.

“I became involved in music at a very young age. I fell in love with classical music at the age of six. It brought a lot of beauty into my life,” said De Léon de Vega. 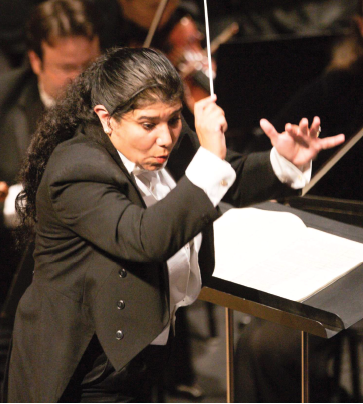 “When I took those workshops, I was very young. When I went at that time, it was all men. There were no female conductors yet. There was no such thing as a female symphony orchestra conductor. At one of those workshops I went to, someone said, ‘Find something else to do, dear, because a woman will never be accepted conducting a symphony orchestra on stage in our lifetime.’ It doesn’t get more discouraging than that, but I didn’t let that stop me. I pursued. I started conducting because I loved it; I didn’t stop to think how difficult it would be as a female and a Latino,” said De Léon de Vega.

“Music is for everyone, it is the great equalizer. It brings everyone together. This is my mission and continues to be my mission. Our audience is very unique; you won’t find it in any other concert hall,” said De Léon de Vega.

De Léon de Vega has also been a guest conductor for many orchestras and opera companies and has developed concerts and children’s music workshops for the Cultural Affairs Department of the City of Los Angeles.

“The City of Los Angeles’ Cultural Affairs Department was our very first supporter. It was very nice to have that support. I loved working in the city of Los Angeles. One thing many symphony orchestras do is that they will hire conductors from somewhere else, whether another country or another state. I think it’s important to serve my own community. I live in Los Angeles and that’s the city I want to serve,” said De Léon de Vega.

De Léon de Vega is also celebrated in educational circles for creating “Discovering Music” in 1998, a two-year music education program that brings orchestra members into elementary schools in underserved Latino neighborhoods to introduce children to classical music and the instruments of the orchestra. She hopes that the program will have a deep impression on the childhoods and lives of the students.

“I wanted to have a powerful impact on children. The way I decided that would happen is to have one musician per classroom. We send in different musicians each time to introduce the children to individual instruments. It’s been absolutely wonderful. I think people sometimes underestimate the power of culture, the power of music, the power of beauty, and I’m just thrilled to have the opportunity to introduce that to children at a young age,” said De Léon de Vega.

Discovering Music is currently offered in 18 elementary schools throughout Los Angeles and has affected more than 40,000 students in 35 schools. Due to its success, Discovering Music has been expanded to include a string program that offers free violin lessons throughout the school year and a mentorship program in middle schools. The mentorship program has recently extended to high school students.

“There are many kids who not only like our program and like the musicians, but walk away saying, ‘I want to do that too.’ So, we work with middle and high school students to help them improve their technique and performance. The schools we go into are at-risk areas that don’t have strong music programs. This next season, too, we are starting our youth orchestra, which will be built from those middle and high schools,” said De Léon de Vega.

Under the leadership of De Léon de Vega, Santa Cecilia Orchestra and the Discovering Music program have attracted the sponsorship of noted foundations and institutions, including the Annenberg Foundation, the Weingart Foundation, the James Irvine Foundation, and the National Endowment for the Arts.

“It’s absolutely wonderful. We’ve received the very competitive, very prestigious grant from the National Endowment for the Arts for the last ten years. We do have a lot of foundation support. They support us and it feels good [to have that],” said De Léon de Vega.

With the help of the latter sponsors and almost 20 years of groundwork, De Léon de Vega hopes to expand the Santa Cecilia Orchestra.

“I want to make it a solid institution in Los Angeles, where it will continue … to provide access to music and to symphonies, and to music lessons and youth orchestras. We are always looking for more funders and more donors and people to support us, because that’s what nonprofits have to rely on—donation. I think it’s a good investment in the community and children’s lives. Personally, of course, all my energy is in this orchestra,” said De Léon de Vega.
De Léon de Vega’s vision is to bring classical music and culture to all lower-income communities and communities of color. With a touch of poeticism, she waxes on the importance of beauty and improvement of one’s self.

“We see a lot of gangs and drugs and we wonder why. We are not filling our children’s lives with something that they can feel good about themselves, and that power of beauty and being moved to something greater. I wish more people would see that and be involved in that,” said De Léon de Vega.

“Even if it’s not in music, [ask yourself] ‘how can I make a difference, what can I do?’ A lot of what I do with this orchestra is about that—touching lives and changing lives. It goes far beyond conducting. I’m in the business of touching souls.”