Disability42 Thoughtleader74
As a four-time Paralympic Gold Medalist and five-time World Champion sprinter, I can say the most important lesson I learned on the track was...

I was born without hands or feet, but my dream was to walk, run and be the fastest in the world. My dream was to make a difference, become a voice, and challenge the stereotypes people have of others with disabilities. I am a firm believer that “if you can dream it, you can achieve it,” so I started running track at age 15. Even though I came in last at every race, running was a way to make friends. During my junior year, I was introduced to my “flex feet,” carbon-graphite feet which are bolted to prosthetics. By my senior year in high school, I was consistently coming in second- and third-place, running times close to Paralympic world records. I knew that if I concentrated and visualized myself running, I could break those world records. 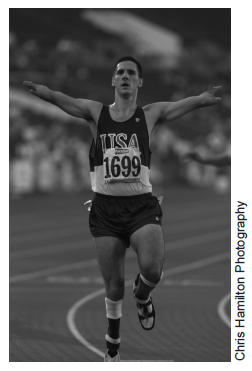 As a four-time Paralympic Gold Medalist and five-time World Champion sprinter, I can say the most important lesson I learned on the track was the concept of pushing myself beyond my own perceived limitations. My competition was always just as passionate about winning as I, so when I was beaten in a race I would just bounce back by training with more focus and intensity. Athletics has taught me how to overcome adversity and take risks; it has also taught me how to not take things personally. I translated these values into my career with Charles Schwab. I came to work for Schwab because of its outstanding reputation for customer support. I am a member of the Advisor Services Production Support Group. I apply those learned values from athletics to promote my ideas and help create a more functional environment, which I believe has made me a more productive team player and leader.

I’ve had the honor of being the recipient of several awards, including the International Olympic Committee Presidents Disabled Athletes Award. My greatest honors came this year: I was nominated to be inducted into the Olympic Hall of Fame, Class of 2012; I was a Team USA Athlete Ambassador and helped prepare the 2012 Olympic and Paralympic teams before their departure for London; and I was able to share my story more broadly through my memoir, Fastest Man in the World: The Tony Volpentest Story. As I look back, none of those honors would have been possible had I not pushed myself beyond my own limitations.