Are College Departments and Faculty Responsible for the Lack of Diversity in STEM?

Education62 Women87
It has been much publicized within the past few years that the U.S., once dominant in all aspects of education, has been lagging behind...

It has been much publicized within the past few years that the U.S., once dominant in all aspects of education, has been lagging behind other nations in terms of science, technology, engineering, and math (STEM) education. The Obama administration, specifically, has tied STEM with innovation, and thus competition, on the world stage. In other words, STEM is no longer an educational lapse—it’s a national security issue. And while growth of STEM overall is encouraged, it has been specifically targeted at underrepresented minorities (URMs) and females.

A recent study released by Bayer showed that the lack of diversity among STEM professionals may have its origins in college. In its 2010 Facts of Science Education survey, a series conducted annually since 1995, Bayer found among female chemists and chemical engineers almost half reported they were discouraged at some time during their career, most often during college by a professor. For this reason, Bayer decided to seek out the reasons why females and URMs do not go on to STEM careers, starting at the beginning of their educations.

“College STEM departments are critical chokepoints in education, a point where students make important decisions about their careers—and a place where many decide to drop out of STEM. That has to change. If the United States is to continue leading the world, then the priority of higher education—and indeed of all of us in STEM—must be on making, not breaking, the next generation of American scientists and engineers,” said Greg Babe, President and CEO of Bayer Corporation.

Indeed, the 2011 Facts of Science Education survey looked at more than 200 of the top research colleges and universities in the country, from MIT to Berkeley, surveying STEM department chairs. More than half of the department chairs were middle-aged, 87% were male, and nearly all were Caucasian. Generally, female and URM representation among faculty was low, which may affect how students relate to faculty.

“I don’t believe that the system goes out of their way to discourage woman and URMs from entering STEM. It’s more that when URMs look at people in positions of influence and leadership [department chairs, professors] in STEM they see very few women and URMs represented,” said Kim First, President & CEO of The Agency Worldwide.

Survey trends show that female and URM numbers have remained the same or increased in recent years. The number of females and URMs enrolled in introductory STEM courses has increased, which is promising.

Other survey trends showed that female students were often the most prepared when entering college, while URMs were the least.

Many wonder why there would be fewer females than males in the STEM field if such statistics are true. In reality, females and URMs often feel barriers. One of the biggest challenges is financial—“helping them find the money to stay in school.” For URMs, “preparedness is a challenge … we do not control admissions,” as one department head articulated. In other words, if prospective students are not admitted to college at all there is no way to try to retain them. Once they are admitted, they often are ill-prepared academically compared to their STEM peers. URM students also cited being isolated from other students in STEM courses.

Female students most notably are deterred from pursuing STEM because of their environments—family decisions play a major part, as well as a lack of advising in high school and an unsupportive environment for their goals.
Eighty-three percent of department chairs report that STEM faculty have a role in counseling students to consider other fields of study. Only a few recognized that this may be inappropriate or discouraging to students.

Females and URMs may also be discouraged by difficult introductory classes that attempt to “weed out” students from pursuing STEM. Almost half of department chairs believe this is harmful because they may drive away students with potential. These classes are generally believed to have more of an effect on URMs than majority students. URMs as a whole are seen to have more barriers than women.

Said one STEM Department Chair: “[URM students] often are discouraged because the intro courses are challenging compared to their high school experience. This is not only true for URMs, but they seem to take this challenge as a sign they should do something else.”

Overall, the STEM department chairs found the reasons for a lack of representation of females and minorities came from university leadership. Although almost all believed that increasing the number of women and URMs in both STEM education and the country’s workforce is an important national need, only one-third of faculty reported their university had an overall STEM goal plan. The study reached the conclusion that university leadership must act to change STEM education in America.

“We need all of these students [women, African-American, Hispanic and American Indians] in STEM, so understanding the college environment in which they find themselves is the first step toward making meaningful institutional change. And no matter how reputable the institution, no institution is above change when change is needed,” said Babe.

Department chairs also cited pre-college STEM education as a major factor, which should “begin early and with a better curriculum.” Chairs agreed that K-5 is the perfect time to start a STEM foundation. This includes improving STEM guidance, teacher training, and critical thinking/problem solving, and less standardized testing, an interesting although controversial conclusion. 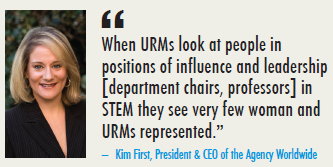 “Key to increasing the number of students seeking and achieving careers in STEM disciplines is expectation, exposure and experience. Particularly for women and underrepresented minorities, who rarely see images of themselves as scientists, it is important that STEM departments and faculty expect them to be in class and to do well,” said Jemison. “Many students do not know what an engineer is, and even less so what they do day to day, so exposure to the breadth of roles and the impact engineers and STEM may have on the world helps students to understand the positive aspects of the disciplines. Finally, experience working in jobs makes careers familiar and doable.”
Jemison voices the significance in STEM diversity, which is at the core of both the Bayer Study and the goals of improving STEM education.

“The importance of diversity is not just about adding more people to the STEM workforce,” said Jemison. “Of critical value as well is gaining the ideas, insights, abilities and perspectives of varying perspectives that approach problem-solving, inventing and innovating in different and valuable ways.”